The history of Chinese high heels 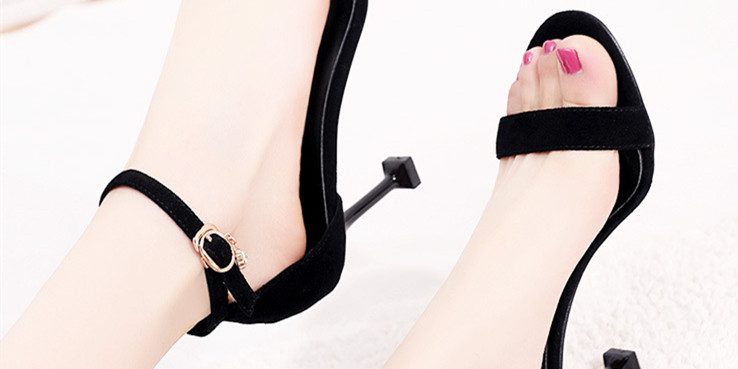 China has high heels in the Zhou Dynasty. According to relevant records, more than 2,200 years ago, the women’s ceremonies worn by Zhou Dynasty women were round-headed shoes, which they called “ancient high-heeled shoes.”
“Yutai New says” has the first poem “and Xiangdong Wang Mingshi Yuecheng”: “The high-profile suspicion is built up, and the singularity is swaying.” The image is very high. Otherwise, the “high heels” are quite high. Otherwise, The feet have not been lifted, how can people look like a step? This is the situation of women wearing shoes in Liangdai more than 1,500 years ago.
There were also “high heels” in the Tang and Song Dynasties. In the Song Dynasty, the calligrapher Mi Fu wrote in the slogan of “The Queen of Tang Wende’s Relics” that the shoes of the Queen of the Tang Dynasty were “woven with Dan Yu, and the golden leaves were decorated with clouds, long feet, and three inches at the bottom.” The high heels are more than three inches high at the bottom, and the bottom is narrow. When people give such shoes a very poetic name is “late night”, which means that the bottom of the shoes is slowly falling, high and dangerous.
This kind of shoes is suitable for “women are short”, and it is very popular among court ladies and everyone. ——The popular women wedge shoes are similar to the high-bottom shoes called “Late Down”. The soles of the feet are like stepping on bricks, which makes people feel heavy. However, women, therefore “increased” nearly 10 cm. And those shoes that are not high-end shoes, collectively referred to as “far travel”, equivalent to sports shoes.
Ancient Chinese rituals pay attention to women’s dresses to shovel, but this is not for the sake of beauty, intended to prevent “going out.” In the feudal dictatorship of the Ming Dynasty, the woman’s dress was to wrap every part of the body, and it was best not to obstruct the walk. Therefore, “the clothes are covered, but the bottom is high, so the bottom is high.” It can be seen that the bottom of women’s shoes in the Ming Dynasty is not only to increase beauty.
In the Ming and Qing Dynasties, the wind of the foot is prevalent, especially in Shanxi, Shaanxi, and Gansu. “Even with the foot of the fiber, it is more important than the beauty of Germany. Otherwise, the mother is ashamed and the husband is humiliated.” Women who wear their feet also have “high heels” that fit their feet.
In the article “The Bow Foot” of the Qing Dynasty, Liu Tingyu said: “After the foot-binding, the woman wears bow shoes, embroidered shoes, and crested shoes, and the heel of the shoes, the shovel is round and high, and the name is high. From the height of the ground, the more the bow is smaller.” This “high bottom” is closer to the modern “high heels” than the “high bottom” of the previous one.
Wearing such a “high-bottom”, the weight of the whole body of the little-legged woman is on the toe of the “bow-small”, which is quite painful, so the road is trembled and screaming, and it is difficult to make it, but it makes The female figure is tall and lovable. The woman is pleasing to her own, and her feet are worn in the “high bottom”, which became the fashion of the time.
The rulers of the Qing Dynasty were extremely disgusted with women’s foot-binding and prohibited Manchu women from binding their feet. Manchu women also have “high-heeled shoes” belonging to their own national style. “Eight-flag women are three or four inches thick at the bottom, round the front, and the outer coat is long and cover their feet.” The shape is that the middle of the sole is several inches high, and the middle is fine, also called ” High-soled shoes.”
There are two types of Hegu “high-bottom shoes”: one is that the heel is open and convergent, and the inverted trapezoidal flower pot is called “flower pot bottom”; the other is that the heel is fine and wide. The front flat and round, its shape and landing impressions are like horseshoe prints, so it is called “horse hooves”.