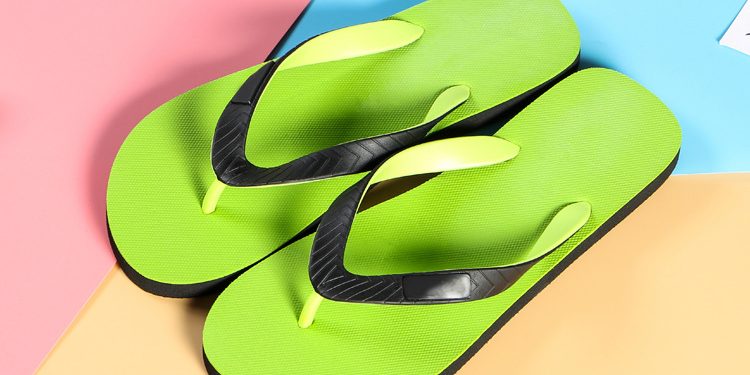 The flip-flops are also called “prong-toe slippers.” Listening to the pronunciation of the word, the rhythm of kicking and kicking has been a kind of randomness and freedom. Merchants say that wearing “flip-flops” will make the ankles, calves, and thighs evenly symmetrical, which will play a wonderful role in the bodybuilding of the legs; doctors say that wearing “flip-flops” is harmful to health and can cause joint pain and ankle sprains. Wait for a series of foot problems. Although the debate is still in place, the final conclusion is that the “flip-flop” that represents fashion, freedom, liveliness, and happiness is still the favorite of young people.
The history of flip-flops can be said to be quite long. As early as thousands of years ago, humans used animal skins or all available materials to wrap them around the soles of the feet. It can be said that the earliest prototype of the flip-flops–the most basic mechanics of shoes As for the Japanese and Brazil, the people who dragged their characters to the future will be counted. In addition to the typical hibiscus type flip-flops in Japan, the Brazilian gel is the most comfortable.
The flip-flops, which are full of free spirit and casual feeling, are popular among designers and are used in various fashion shows. On the other hand, although the structure of the flip-flop is simple, it has unlimited creative possibilities. Illustrators and designers can use simple herringbone buckles and flat soles as free-form canvases, while ordinary consumers can even freely create their own, with the free matching of the herringbone buckle and the sole. Create exclusive personal designs. And a pair of finished flip-flops can also be freely created by pasting various decorations. Such a “liberalism”, how can the team of supporters who are not letting people grow up!

Wearing a flip-flop should pay attention to:
1. Don’t wear flip-flops all day long, especially when you haven’t adapted, it’s best to wear it for a short time, such as by the sea or by the pool. Wear flip-flops should not go quickly, time should not be too long.
2, do not wear flip-flops when driving a car, because it is more difficult to effectively control the brakes, the damage is greater than the high heels.
3. It is necessary to select a flip-flop with a higher safety factor: for example, the sole is thicker and cannot be bent, which can provide more support for the arch. Or it is a large upper, it is not easy to get off the flip-flops. The thin and thin flip-flops that are worn in the bathroom and pool simply do not provide any protection to the feet.
4, do not wear the star of the dog. The star has reached a certain level. When you go out, there are paparazzi and tails. The person who wants to walk quickly is the most unsuitable for wearing flip-flops.
5, pregnant women, people who are overweight do not wear. People who are overweight need more support from their shoes. They usually put more pressure on their feet, ankles, and backs due to obesity. The flip-flops will increase the loss of these positions and bring more damage to these parts.
6, easy to wear shoes do not wear. Paris Hilton’s sister, Nicky, often wears flip-flops in the summer shopping, but she has once strolled to drag the left-footed characters out and let the paparazzi next to the joke. In fact, sandals are very easy to be smashed, and flip-flops are more likely to be embarrassed. To ensure that they are not shackled, they can only be clamped hard. It is easy to hurt muscles and tendons when they are hard, so those who are easy to pick up shoes are not It is suitable for wearing flip-flops and the image is destroyed.
7, the foot needs special care to people do not wear. Athletes like Ronaldinho and Yao Ming who are relying on their feet should not wear flip-flops, and flip-flops will increase their chances of sprains and falls.
8, under high-temperature weather, if long-term wearing flip-flops in the sun, it is easy to sunburn the skin of the feet and even causes skin cancer.
9. Don’t wear flip-flops for outdoor sports in uneven places.

Flip-flops famous brand recommendation
Havaianas
In 1962, influenced by Japan’s ZORI FLIP-FLOP flip-flops, Brazilian producers began to make Havana flip-flops. In 1965, Havanas sold 1,000 pairs a day, almost becoming Brazilian national shoes. In 1970, the famous talk show host in Brazil, Chico Anysio, proposed that Havanas is an imaginative brand.
Since 1962, with the unique secret formula of natural rubber, rich in colorful colors and prints, Havaianas, which are loved by the city’s small people to nobles and even superstar celebrities, has reached 220 million pairs worldwide. The number of sales. Well-known fashion magazines like Vogue, Cosmopolitan, ELLE, and Wallpaper… have made special reports for Havanas.
Most notably, in 1994, Havaianas launched a monochrome line of slippers, HAVAIANAS TOP, in order to increase the cost, and did not expect to get the upper market (over upper classes). ) favored.
In 1996, Havanas triumphantly pursued an advertisement that was based on elegance and uniqueness. During the 1998 World Cup, Havaianas launched the BRAZIL Brazilian commemorative flip-flops. According to the official, this commemorative Havana is still selling.
In 2000, Havanas’s slippers appeared on the model feet of the show.
On March 5, 2006, at the Oscars, everyone who received an Oscar nomination received a gift bag worth about $50,000, which contained a variety of exquisite gifts, one of which was worth every double. About $1,000 in the Brazilian Havana, the slippers also have their personal names printed on them. Havana’s Havaianas offer the Oscar nominees the new black slippers of the year. Among them, women’s slippers are decorated with silver, zircon and black diamonds, and the style is luxurious; men’s slippers are simple, only a five-pointed star made of sterling silver and black diamonds.