The cultural history of high heels 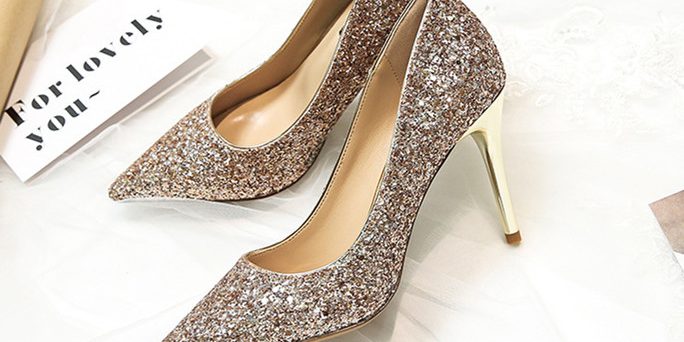 In the 15th century, during the Ming Dynasty, the new women’s shoes in the Ming Dynasty were fitted with long round bottom heels of 4 cm to 5 cm high at the back of the soles, wrapped in silk. The pointed-footed eagle-headed high heels unearthed from Dingling, Beijing, are very elaborate. Beijing Dingling has unearthed a pointed eagle-head high-rise shoe with a length of 12 cm, a height of 7 cm, a width of 5 cm and a height of 4.5 cm.
An Italian shoemaker invented high heels in the 15th century, initially to overcome the walking problems caused by muddy roads on rainy days, and the results were surprisingly good. But after he put on his high heels, he walked for a while and walked away. After the men put on the high heels, they were funny and looked very ugly, so they had to collect them. On a rainy day, his wife is going to visit the sick father. The shoemaker has a good idea and lets his wife put on the high heels. Although it is a little big, it is enough to tie a rope on it.
As a result, the wife did not feel how uncomfortable walking in high heels. Instead, she seemed to walk in a graceful manner. Every passing man was watching her, and many fashionable women rushed to buy such shoes. Since then, the height and width of the heel have changed from time to time, but the enthusiasm for high heels has lasted for a long time. Because “shoes share experiences with women, no matter where you are in life, whether you are fat or slim, your shoes will always be with you.”
17th century: In fact, when the western high heels first appeared, there was also a saying that it was convenient for people to fasten their stables when riding. It was not until the end of the 16th century that high heels became the fashion of the nobility. Some short-skinned men began to use high heels to make themselves look taller. The heel of the high heel is thickened and the height is appropriately lowered, which becomes a daily high heel for men. The most famous of these is the short stature of Louis XIV, in order to make himself appear taller, more powerful, more confident and more authoritative, so that the shoemaker put a 4-inch high heel on his shoes, and Paint the heel red to show his distinguished status.
By the 18th century, high heels began to become an important element of men’s and women’s fashion. At this time, the high heels are 3 inches high, the shoes are quite slender, and the heel and the sole are integrated. If you have the opportunity to walk to the 17th-century street, you will find all the pedestrians on the street wearing the same style of shoes, because, At that time, the shoemaking technique could only create a style of high heels.
From the end of the 18th century, people began to try to make a slimmer heel, but the support was not enough. Only the top of the heel was widened to connect the sole. By the end of the 19th century, the height of the high heels gradually fell back. Instead, the ribbon was added.
In the 20th century, the cute MaryJane shoes were first introduced. This style has been popular in the 20th century for 50 years. At that time, the shoe-making technology was quite mature. The shoes were made with different materials such as satin, silk, and leather. It is also more diversified.