LED light sandals are sandals with LED lights that emit colorful lights at night, and children like these shiny shoes. 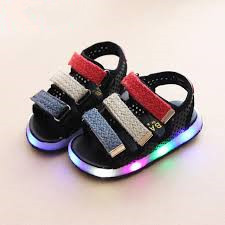 LEDs, light-emitting diodes, are solid-state semiconductor devices that convert electrical energy into visible light, which convert electricity directly into the light. The heart of the LED is a semiconductor wafer. One end of the wafer is attached to a holder, one end is the negative pole, and the other end is connected to the positive pole of the power supply so that the entire wafer is encapsulated by epoxy resin.

The semiconductor wafer consists of two parts, one part is a P-type semiconductor, in which the hole dominates, and the other end is an N-type semiconductor, which is mainly electrons here. But when the two semiconductors are connected, they form a P-N junction. When a current is applied to the wafer through the wire, the electrons are pushed toward the P region. In the P region, electrons recombine with the holes, and then the energy is emitted in the form of photons. This is the principle of LED light emission. The wavelength of light, which is the color of light, is determined by the material that forms the P-N junction.

The intrinsic characteristics of the LED determine that it is the most ideal light source to replace the traditional light source, and it has a wide range of uses.

The LED is basically a small chip that is encapsulated in epoxy, so it is very small and very light.

LED power consumption is very low, generally, the operating voltage of the LED is 2-3.6V. The operating current is 0.02-0.03A. This means that it consumes no more than 0.1W.

LEDs have a service life of up to 100,000 hours at the right current and voltage

LEDs are made of non-toxic materials, unlike mercury-containing fluorescent lamps that can cause contamination, and LEDs can be recycled.

The LED is completely encapsulated in epoxy, which is stronger than both the bulb and the fluorescent tube. There are no loose parts in the lamp body. These features make the LEDs hard to damage. 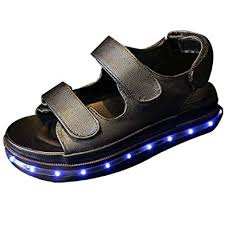 Note:
1. When charging, please slowly insert and pull slowly.
2. There is a hidden switch on the inside of the shoe.
3. When charging, the sole light will remain bright until charging is complete.
4. The LED light can be kept on for 9-10 hours in a full charge hour.
5. Do not wash with water. If it is necessary for cleaning, wipe it with colorless shoe polish or detergent.