The history of sandals

Because of its extremely simple construction, sandals are the earliest items in human history.
The Egyptians left their footprints on the damp sands as early as 3500 BC – they were braided into a sole that matched the size of the feet and fixed on the feet with raw cowhide straps. These sandals are very practical. Wearing them can protect the soles from the dry and rough ground. The downside is that the feet are exposed in broad daylight. The wise Egyptian women decorated the jewels to protect them from the sun and beautify the image. The soles of the sandals worn by the Roman empresses are made of gold. The rare treasures are embellished on the laces. They are sexy and charming, and they are dazzling.
The Japanese called the woven sandals Zori, the Persians and the Indians wore the split-toe sandals, and the Africans used the dyed pigskin to sew a “one-legged” style. Later, Mrs. Ras used felt and the Spaniard used a rope chain. Since in the cold and humid Britain, they also imitated the Mediterranean invaders wearing sandals. But these various sandals are very different from the most primitive Egyptian style.
Although there are many shoes that can reveal the status of the wearer, the sandals are different. Whether it is a distinguished noble person or a poor person; whether it is an innocent girl or a dusty woman can wear it. In the Middle Ages, civilian attire and despicable people wore plain wooden sandals, and the sorcerers and monks at that time also dressed like this to show their disdain for the glitz of the world. In the 1920s, after nearly a long period of nearly 1,000 years, sandals have regained people’s love and favor, becoming a popular thing. With the heel of various heels, it has returned to the sun, and it is more and more charming. Thanks to the metal arch pad created by Ferragamo, high heels no longer require a toe to block the downward trend of the foot. By the end of the 1920s, the toes gained more freedom and attention. They were dyed in bright red and poked out of high-heeled sandals. Soon there was a new style, with only a few laces that were as thin as noodles on the feet, and the women’s feet were unreservedly displayed under the eyes of the crowd.
During the 1960s, sandals returned to the flat style, which was picked up by Birkenstock. But in the 1970s, disco high-heeled sandals made of realistic snakeskin and silver-lighted leather became the darling of fashion, and flat-bottomed shoes were thrown into the corner. However, it didn’t take long for the disco style of the jewels to feel a little frivolous and tacky. In the 1980s, some big-name designers, such as Maud Frizon, Manolo Blahnik, and Bennis Edwards, improved the high-heeled sandals, and the more concise foot decoration was sexy and dignified. These designers show us the true essence of ancient Egyptian sandals – a pair of good sandals should highlight the true color of the feet, not other fancy items. 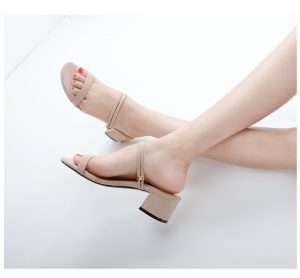